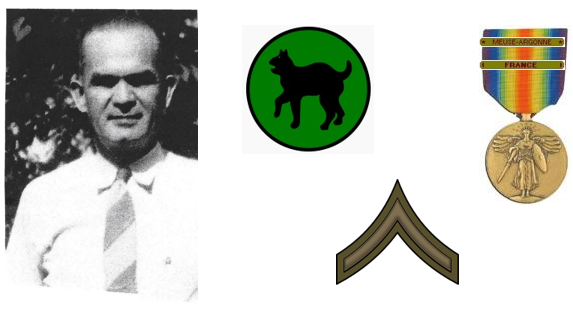 Homer Tannery was born in 1893 in Westminster, South Carolina, entered the military in May 1918.  He was assigned to the 81st Infantry Division, 324th Infantry, Company H serving in France with the American Expeditionary Forces.  He participated in the Meuse-Argonne operation, November 2-11, 1918.

“Having received orders to relieve the 35th Divisions east of the Neuse River, the 81st Division took over the front line from Fresnes-en-Woëvre to Bois d’Hardaumont, assuming command at 8 a.m., November 7. Early on November 8 orders were received from French II Colonial Corps to attack the next morning. Before the attack the left boundary of the division zone was moved to the Abaucourt-Etain road.

The division attacked as ordered on the morning of the 9th, advancing beyond the town of Manheulles on the right and into Bois de Moranville on the left. On the following day further advance was made on the left to the line Grimaucourt-en-Woëvre—le Grand Cognonwood—Abaucourt.

On the morning of November 11th the 323rd Infantry attacked Ville-en-Woëvre, but word of the Armistice halted the advance about 1 kilometer northeast of Manheulles.  One battalion of the 324th Infantry reached a position about 200 meters north of the southern edge of the Massenoue wood.  On the Left, the 321st Infantry started its advance at 6 a.m. and by 11 a.m. had reached the enemy wire southwest of the line Hermëville-Hautecourt.”    (Excerpt from the 81st Division, Summary of Operations in the World War)

After the war, Homer worked as a ticket agent for the Seaboard Air Line Railway until his untimely death in 1945.