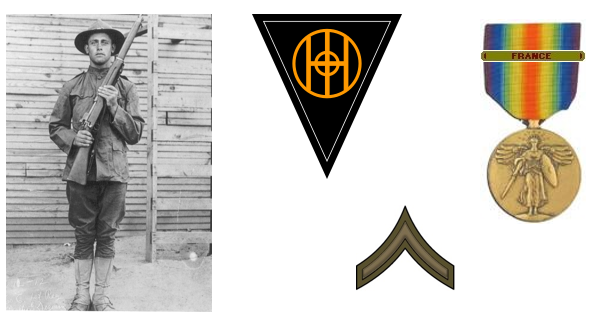 Walter DeZearn was born on November 20, 1894 in Maynardville, TN.  Entered the military on May 28th, 1918 and was assigned to the 83rd Infantry Division serving in France. The 83rd was primarily a depot (replacement) division supplying over 195,000 officers and enlisted men as replacements in France without seeing action as a complete formation. Certain division units saw action, but not the 49th Infantry. Walter was discharged on April 15, 1919.

After the War, Walter returned to farming, as a tenant farmer.  He married Nellie Louise Miller on July 12, 1923.  They had 13 children, 5 girls and 8 boys.  He lived to be 82 years old. He is buried in Little Flat Creek Cemetery, Corryton, TN.