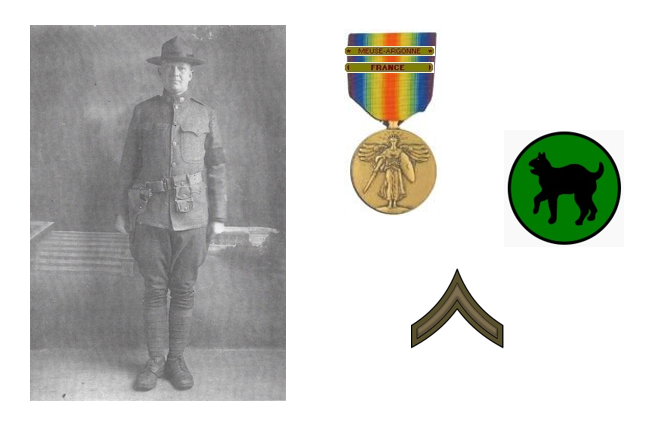 Silas Egbert Howell was born in Wayne County, North Carolina on February 12, 1896, son of David Green Howell and Marceline Johnston Howell.   He was inducted into the Army on May 27, 1918. Silas served with the 221st Military Police Company prior to his discharge. He was honorably discharged on June 26th, 1919. After the war Silas served as a trooper in the NC Highway Patrol, retiring after 22 years.

His daughter, Bettie, received her father’s WWI Victory Medal with the France Service and Meuse-Argonne Battle clasps at a ceremony attended by other family members.

From the 81st Division, Summary of Operations in the World War

…At 4 p.m. the firing line was further supported by the entry into the fight of one platoon from Company I, which had taken the place of Company H as left support company of the 2nd Battalion. At 4:30 p.m. Company F was ordered into position with its left on the town.  Its line extended 400 meters across the field south of Moranville.

Moranville was captured about 5 p.m. and an outpost position, occupied by Companies E and F, was established along the general line of the Blanzee-Moranville road, in contact with the outpost of the 3d Battalion to the left.  Company G established an outpost on the right flank south of Moranville. Company I, which at 7:30 p.m. had returned to the control of the 3d Battalion, was ordered to move around the northeast corner of Moranville and establish an outpost for the night in a north and south direction, maintaining contact with Company K to its right.  The movement was competed at 8:45 p.m.  The line of the 3d Battalion was straightened with Companies M, K, and I, from right to left, in the outpost position…