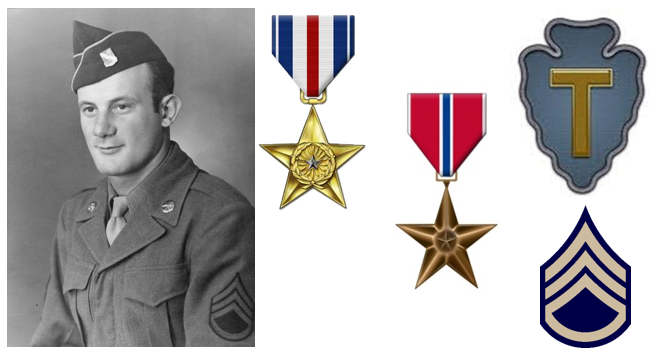 Louis Ciccotti, born in Rome, New York, was inducted into the Army on May 28, 1942. He served overseas in Europe from April 1943 to September 1945 seeing action in the Mediterranean, participating in the Invasion of Southern France and further action in Europe. His son, Russell, received his father’s overdue awards.

“for meritorious achievement in active ground combat against the enemy, effective 9 September 1943, while serving with Company C, 1st battalion, 143d Infantry Regiment, 36th Infantry Division, in support of the Texas Division’s assault upon Salerno, Italy.  Private Ciccotti’s exemplary performance of duty in active ground combat was in keeping with the finest traditions of military service and reflects great credit upon himself, 143d Infantry Regiment, 36th Infantry Division and the Army of the United States.”

“for gallantry in action from 17 to 19 December 1944 in France.  Sergeant Ciccotti as assigned the mission of leading a patrol into a town to hold the right flank as his company prepared to attack.  When hostile infantry opened fire with machine guns and rifle grenades, killing one man, he set up his position in a house.  He held this position for two days without food or water and under repeated assaults.  During the second night, crawling the first 100 yards, he led his men to elude the encircling enemy and returned to his company with information regarding the disposition of the hostile troops.  By skillful leadership he was able to accomplish his mission and return with information of great value to his company in their attack.”

After the war, Louis returned to Rome, New York working for Revere Copper and Brass retiring after 42 years. Louis’s other awards and decorations include: 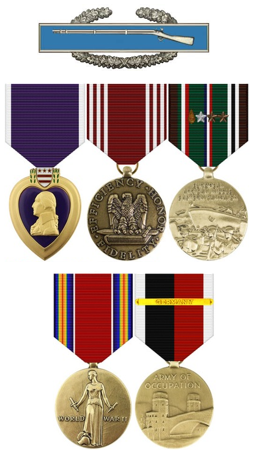