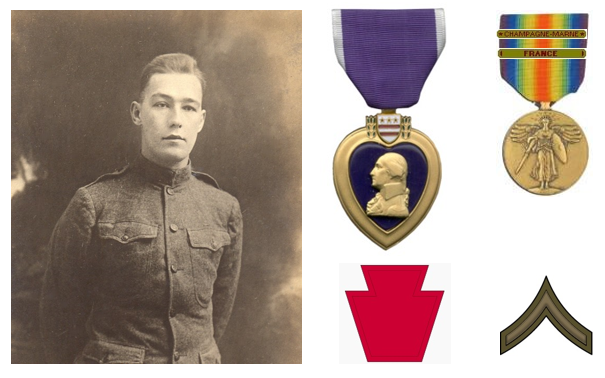 Clarence Newton Walters was born on June7th 1893 and raised in Royersford, Montgomery County, Pennsylvania.  He was the first born son of Samuel and Ada Walters.  At the age of 25 he entered the Infantry on April 2, 1918 serving with the 112th Infantry. He was wounded (gassed) at Chateau Thierry on July 16, 1918.  The family received a missing in action telegram.  He was taken in, hidden and cared for by a local French family in their basement.  He was later transferred to a hospital and was honorably discharged March 1st, 1919.

Clarence was posthumously awarded the Purple Heart at a ceremony, his son accepting the award. His son also received his father’s WWI Victory Medal with the France Service and Champagne-Marne Battle clasps.

The following is an excerpt from: With the 112th in France: A Doughboy’s Story of the War:

“It was Château-Thierry at last!

German guns, raining shells at intervals let it be known that in the midst of even temporary reveries there was the enemy—and he wasn’t far away.  Weird flares dispelled the gathering darkness now and then, great guns resounded, and shells exploded and crashed like a dozen box cars in collision as the column kept up its creeping pace through the historic Marne River city. Through every doughboy’s mind, as the thin, straggly line of heavy-laden soldiers moved forward, there was but one thought:

“We’re in Château-Thierry!  I wonder if the ‘folks at home’ know we are here!”

Then came the cry of “Gas!”  Down the line it went like wildfire; somebody called “double time,” and doughboys, getting into the fast pace, despite the wearisome hike and heavy equipment, jerk on their gas masks and hustled up the avenue.  Shrapnel burst overhead and shells were alighting near the river bank; the “cloud-creasing” was on, and American artillery was keeping up a concert of shell-throwing in answer.” 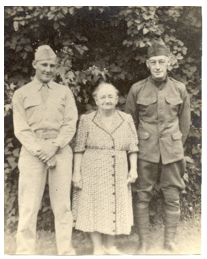 Clarence came from a long line of family veterans who served their country. Pictured left is Clarence, on the right with his mother and Clarence’s son, Lloyd, returning from deployment in WWII. Clarence, Newt – as he preferred to be called, returned home and married his fiancé Catherine Druckenmiller on June 7th 1919.  The couple had five children – Lloyd, Marian, twins – Jeanne and Janice, and Robert.

Upon his discharge from the Army, he opened a grocery store on Main Street in Royersford, Pennsylvania.  He had to close the store several years later when the depression hit.  He then found work at the Gruber Knitting Mill in Spring City, Pennsylvania, where he worked until his retirement in 1958.  He died at home on January 22, 1966.