Thomas Gravley served Korea with the 24th Division at the outbreak of the war. He was wounded during a mortar attack on 16 July 1950 finally receiving his Purple Heart 64 years later. Gravley’s 20 year career also included a tour in Vietnam.

Thomas Gravley’s awards include the: 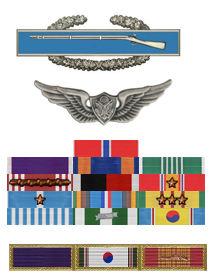