Three sons of veteran Simon Reynolds receive his long overdue Bronze Star Medal at the Veterans Memorial in Garner, NC. Reynolds, who was from Cincinnati OH, was a machine gunner in WWII. He participated in an amphibious landing and the ultimate Liberation of the Philippines. After the Japanese surrender, Reynolds along with the division participated in occupational duties in Japan.

“For meritorious achievement in active ground combat against the enemy on 20 May 1945, while servicing with Company M, 3rd Battalion, 108th infantry Regiment, 40th Infantry Division, in support of the Sunburst Division’s assault landing at Macajalar Bay during the Battle of Mindanao. Private First Class Reynolds’ exemplary performance of duty in active ground combat was in keeping with the finest traditions of military service and reflects great credit upon himself, the 108th Infantry Regiment, 40th Infantry Division and the Army of the United States.”

Reynolds’ other decorations include the: 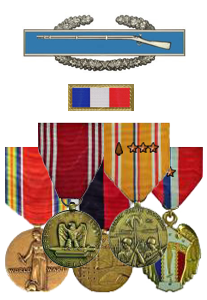