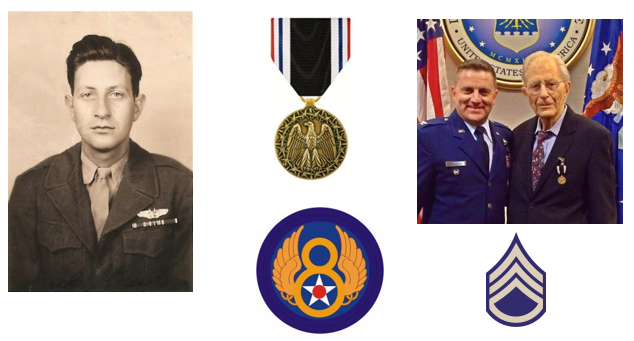 Charles Brudo served in WWII as a B-17 ball turret gunner. He was captured after bailing out of a crippled airplane and never received the Prisoner of War Medal.

Charles Brudo’s B-17 was part of a formation mission over Germany on August 16, 1944. When they neared their initial point to turn toward their target they were attacked by German Fighters. The pilot could no longer maintain control of the aircraft and gave the order to bail out. Unknown to anyone at the time, Brudo’s ball turret was blown away from the aircraft during the engagement. After parachuting safely to the ground, he was captured German farmers and finally was relinquished to German soldiers. Charles was badly wounded and his pilot, Vincent Fonke, tended to his wounds as best he could. Charles remained a POW until he was liberated on April 29, 1945.

Charles’s other wards include the: