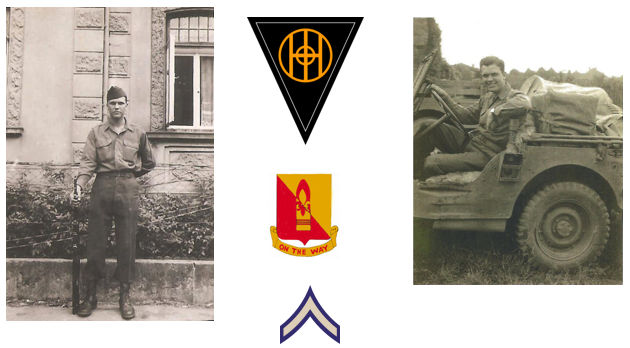 Jack Blanchard served his country during WWII. He served with his unit when they landed at Normandy, through Northern France, the Ardennes, the Rhineland and throughout Central Europe. Jack was a light vehicle driver…more specifically he was the driver for his unit commander, Lt. Col. Paul Thompson. Jack was proud of his service, but had a very hard time speaking about it…it made him remember of his friends and comrades, who did not return home.

An excerpt from “We Saw it Through – History of the 331st Combat Team” provides some insight regarding the 908th.

“Battle hardened by the bloody Normandy campaign of July 1944, the 908th met its greatest test at La Marchandais, a small farm in Brittany about 10 km south of the seaport cities of St. Malo and Dinard. There, on August 10, 1944, as the 908th fired its 105mm guns directly into the St. Malo fortifications, the battalion was subjected to fierce German counter-battery fire.

According to the 908th history, early in the morning of the 10th, the Piper Cub that was carrying forward observers 1st Lt. Philip J. Reichert and 1st Lt. John B. Goettke exploded in mid-air, apparently struck by a shell. Both were killed instantly. (They were awarded the Air Medal posthumously.) 1st Lt. Manny Goodridge recalls seeing the plane being hit. The wing broke in the middle and both wing tips folded forward. A little later, a German 150mm gun began to probe the Headquarters Battery area. Lt. Col. Thompson was in a small stone building when a German shell struck it. According to Goodridge, the shell entered one wall, and then struck the opposite wall causing the shell to explode on the inside of the building. Thompson was killed, and his aide T/Sgt. Russell Williams was blinded. Pfc. Fred Columbia was killed a short time later. Eleven more men were wounded.

Among the red legs who were awarded Bronze Stars that day was Corporal Herbert C. Fairchild of C Battery, who exposed himself to enemy artillery fire to check several hundred yards of vital communications lines. Fairchild never talked of his war experiences, nor ever mentioned his Bronze Star. The only evidence of his bravery at La Marchandais was in his personal notes: the date of August 10 was circled. Next to it was written the word “Bad.”

Jack’s wife finally received his awards and decorations that were lost through the years, the: 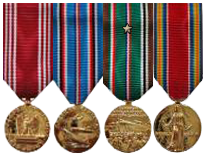