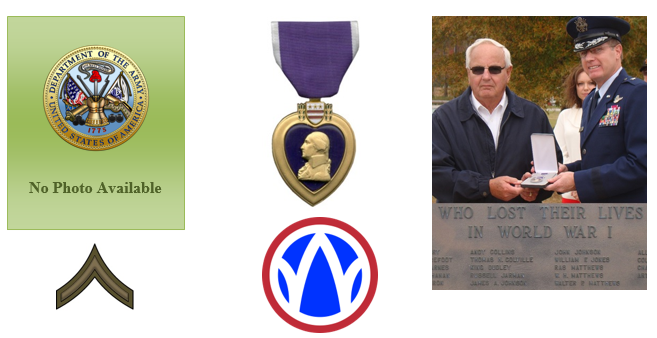 Charlie “Andy” Collins served during WWI from May 28 1918 to November 4, 1918.  Andy’s nephew, representing the family, received his award during a Veterans Day ceremony.

“The next morning our battalion received orders to pass the lines of the 1st battalion. Our company was to support G Company.  Lieut. Gaydash with three squads from the 4th platoon was sent out as a contact patrol.  Their mission was to proceed about 500 meters in advance of the left platoon of G. Company and clean up machine guns on the right of Foret de Jaulney. …a few enemy scouts were sighted at end of trail. Sgt (then Corporal) George G. Hollis who was acting as scout signaled back that enemy could be seen in large numbers digging in.  Lieut. Gaydash deployed his patrol in skirmish line at edge of woods. A machine gun officer and 15 men then arrived and Lieut. Gaydash arranged for one machine gun to be placed on each side of trail. A heavy German machine gun was discovered with several gunners around it. Sgt. Hollis attacked the gun and killed the gunner and took charge of the machine gun. Our machine gun fire was so intense as to force the enemy to stay back. The patrol advanced 400 yards, forcing the enemy to evacuate their newly dug positions and causing about 1000 more to retreat across the Meuse. His retreat was hastened by our machine guns and by the German machine gun which was being effectively used by Lieut. Gaydash and two men. The enemy had shelled our patrol severely with “whiz bangs” and fired on us with machine guns, thus halting our advance. The patrol then was ordered to retire as they were too far advanced. Lieut. Gaydash complied with the order and rejoined G Company. Pvts Paul H. Altenhoff and Charlie A Collins were killed…”

This was part of the Meuse-Argonne Offensive. It was November 4th, 1918. (7 Days before the Armistice was signed).