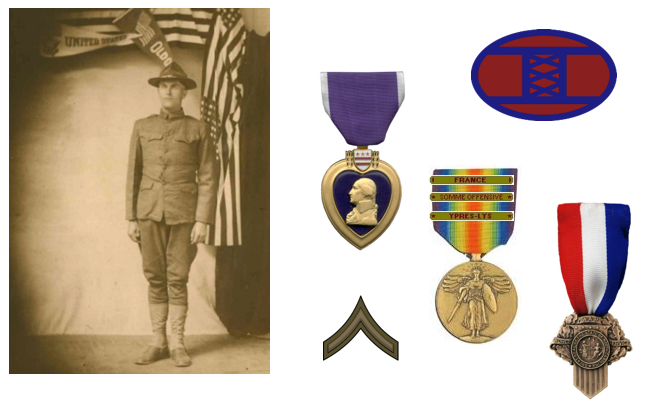 Colin Campbell Shaw was born on February 2, 1889 to Gilbert and Sarah Clark Shaw in the Anderson Creek section of Harnett County, North Carolina.  Colin was the 8th of 9 children.  Colin attended local schools and worked with his brothers on the family farm until and after the death of his father in 1904.  Colin learned to play several instruments and was quite proficient on the violin (fiddle) and banjo. He also loved to sing. He was well known in the community for his musical skills and played for numerous public events.  He took great pride in his nieces and nephews.  By 1917 he was an uncle to 25.  Colin was engaged to a local girl when he was drafted into the U. S. Army sometime after the U. S. entered into World War I in April of 1917.  Colin was sent to South Carolina for basic training.  In letters he sent to one of his sisters, he recalled being on a mountaintop and seeing vehicles “moving like ants” below.  Colin had never seen mountains prior to his Army days.  Sometime in 1918, he received overseas orders and became part of the American Expeditionary Force in France.  Colin served in the 120th Infantry, 30th Division.  He described conditions in letters to home and “longed to see his nieces and nephews and to return to Harnett County” to resume his interrupted life.  He expressed doubt that that would ever happen.  When the war ended on November 11, 1918, the family was excited.  They had last heard from Colin in a letter dated in mid-September 1918 in which he said the war appeared to be coming to a close. He was in the Somme Campaign, fighting along the notorious Hindenburg Line. The excitement quickly turned to grief when his mother, Sarah, received a telegram in late November, stating “We regret to inform you that Pvt. Colin C. Shaw was killed in action on September 29, 1918.” After a period of time, Sarah was given the option of having Colin’s remains returned home or having them interred in France.  She had been told by several individuals that she would not be able to view the remains and that possibly they would not be those of Colin. She decided to have his remains interred in the Somme American Cemetery, Bony, France.  Colin died at the age of 29 years, 7 months and 22 days.  Almost 95 years later, Colin received recognition for his sacrifice for freedom and the United States when he was honored with the Purple Heart and the North Carolina WWI Service Medal in a ceremony at the State Capitol in Raleigh, June 29, 2013.

(Written by his great-nephew)