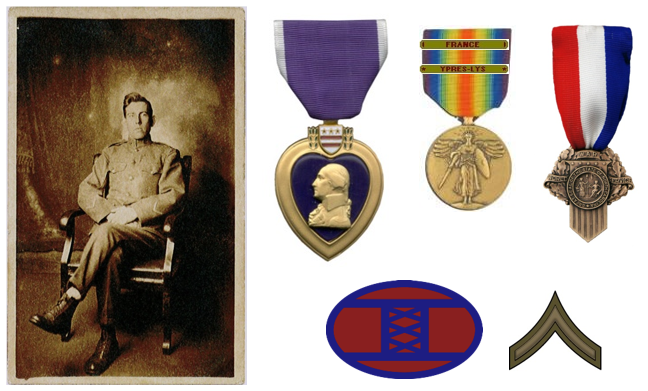 Walter Fitzgerald of Madison County NC served with the American Expeditionary Forces in France from May 17, 1918 to Jan 19, 1919. His son believed his father was wounded during WWI and it was verified that Walter was wounded on August 30th 1918. Walter was posthumously awarded the Purple Heart at a ceremony, his son accepting the award. His son also received his father’s WWI Victory Medal with the France Service and Ypres-Lys Battle clasps and the NC WWI Service Medal.

The following is an excerpt from the Official History of the 120th Infantry:

“On the night of August 26th a cloud of gas was made on the front of this Regiment. The attack was handled by the 105th Engineer Regiment. This regiment furnished 4300 men to assist. 2,520 cylinders of gas, phosgene, and chlorine on nine trains of seven three-ton truck each were conveyed by Light Railway to Trois Rois Spur. From here the cars were pushed by hand to positions just behind the outpost line. All troops were withdrawn for the outpost line. At 3:00 A.M., with the wind blowing about four miles per hour directly towards the enemy lines, the gas was released simultaneously from all the cylinders. The enemy immediately sent up hundreds of lights of every description and opened fire with machine guns over the entire front. These later gradually died out as the gas rolled over them.  It was beautiful sight and a successful attack, but prisoners taken later on stated there were no casualties beyond a few horses.  The outpost line was reoccupied the following night.

All arrangements had been completed for the relief of this Regiment by the 117th Infantry on the night of September 1-2, but on account of increased activity on this front, the relief was cancelled. On August 31st the enemy was reported as withdrawing on the front of the II British Corps. All troops forming a part this corps were directed to estqablish touch with the enemy at once and acertain if the report was true. Two strong combat patrols were sent over about the middle of the day from each battalion. They were ordered to proceed as far as Middlesex Road, and if the enemy was not in strength to establish a new outpost line along that road; but most important of all, prisoners for identification and information strength were desired. The enemy was destroyed in strength along the entire front so the patrols returned with few casualties to the original line. One of the patrols from the 1st Battalion, under command of Lieutenant Boyd, secured 14 prisoners—the first taken by the Regiment. The prisoners furnished a great deal of valuable information and identified the unit on the front.”