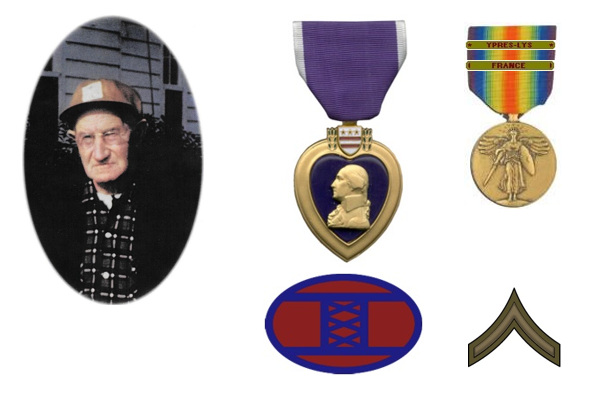 James Ivey Arthur was born on 23 August 1894 in Carteret County, North Carolina…son of Arendell Everet Arthur and Lydia Gaskins Arthur. He was inducted into the Army on October 10, 1917. James was severely wounded September 29th 1918 in Bellicourt when the Regiment broke through the Hindenburg Line. He was discharged April 18, 1919.

After the war, James became a farmer, trucking produce throughout the county. He and his wife Guila raised 7 children. He enjoyed fishing and harvesting oysters in the North River area.

James was posthumously awarded the Purple Heart where his daughter in-law accepted the award. She also received his WWI Victory Medal with the France Service and Ypres-Lys Battle clasps.

From the Official History of the 120th Infantry

“The attack was to be launced at 5:50 A.M. on the morning of the 29th, so on the night of the 27-28 this Regiment relieved the 118th Infantry in the right of the Division Sector.  For 48 hours prior to the attack the enemy defenses were under a continuous bombardment.  Prisoners taken later stated the shell-fire was so terrible it was impossible to bring up food and supplies.  Prisoners also stated that the attack was expected, as a British plane with a barrage map had been shot down, but the zero hour was not known.

At 4:30 A.M. all troops were reported on the tape—the 3rd Battalion on the right, the 2nd Battalion on the left, and the 1st Battalion in support.  All troops were moved away from the trenches, as the enemy counter barrage was expected to come down promptly on the trench system, the tanks lumbered into position—everything was ready.  Promptly at 5:50 A.M. the barrage from fourteen brigades of artillery, in addition to the heavies, came down.  To this was added the machine gun barrage of all guns of the three battalions of machine guns.  The machine gun barrage started a second ahead of the artillery.  The troops who had closed up as close as safety permitted to the barrage shook themselves out as they moved away.  All was going well when there settled over the entire area a fog so dense, which, combined with the smoke in the barrage, made it possible to see more than six yards away.  Officers lost all control over the troops.  The success of the attack now depended upon the individual, and the advantage of giving each man as much information as possible was clearly seen, for without hesitation the men moved on and on.  At 7:25 A.M. the main Hindenburg System had been crossed, and the mopping up battalion was maintaining a constant flow of prisoners to the rear. At 11:30 A.M. Nauroy was occupied, the Regiment was on the objective, and the Australians had passed through.  At 11:45 A.M. the cleaning up of Bellicourt was completed.  A part of the 117th Infantry crossed the Canal, and attacked to the right and along the east side…”